This article from Yale News features promising research about how parent training can help improve anxiety levels, tolerance and outcomes in their children. According to Dr. Eli Lebowitz, Director of the Program for Anxiety Disorders at the Yale Child Study Center and Assistant Professor at the Child Study Center at the Yale School of Medicine, “There are currently two evidence-based treatments for anxiety — medication and cognitive behavioral therapy, yet only half the children respond to these therapies, so there is a great need for alternate treatments.” The new program called SPACE developed at Yale helps parents handle issues arising from living with an anxious child.”

Read the rest of this story written by Bill Hathaway

Yale researchers have developed an innovative way to address an epidemic of anxiety disorders afflicting the nation’s children: treat the parents.

A new program developed at Yale that counsels parents is as effective in treating common anxiety disorders as cognitive behavioral therapy for the child, according to a randomized trial of the two therapies published in the Journal of the American Academy of Childhood and Adolescent Psychiatry.

One in three children will experience clinically a significant anxiety disorder before adulthood. Unless treated, many will become anxious adults.

Parents of anxious children almost always try to accommodate their child, Lebowitz said. For instance, if the child suffers from social anxiety, no friends are invited to the house; in the case of separation anxiety, parents sleep with the child or never leave the home. Parents constantly reassure a child with generalized anxiety. While the responses of parents are natural, studies have shown they also leave children suffering from debilitating anxiety into adulthood, Lebowitz said.

Researchers randomly assigned 124 children ages 7 to 14 with diagnosed anxiety disorders to either receive cognitive behavioral therapy or their parents were enrolled in 12 weekly counseling sessions to help them better cope with the anxious child. For instance, a parent assigned to SPACE gradually reduced the dozens of text messages a day they sent their child to two or three. Parents who repeatedly kept their child out of school because of anxiety-related stomach aches learned to say, “I know you are feeling upset right now, but I know you will be okay” and sent their child to school.

Both approaches were equally efficacious in reducing anxiety symptoms in children and stress levels of parents, researchers found. “Accommodating’’ behavior by parents was substantially reduced among those who received SPACE counseling.

Lebowitz said he hopes to train therapists to offer the program now that its efficacy has been established. But what parents shouldn’t do is ignore the problem, he cautions.

“Severe anxiety is a serious condition which damages children, disrupts family life, and in some cases leads to suicide,” he said. Just Released ! The Ultimate Guide to Working with Your School

Many schools don’t understand school avoidance, so parents must take on the role of advocate and educator. You may feel 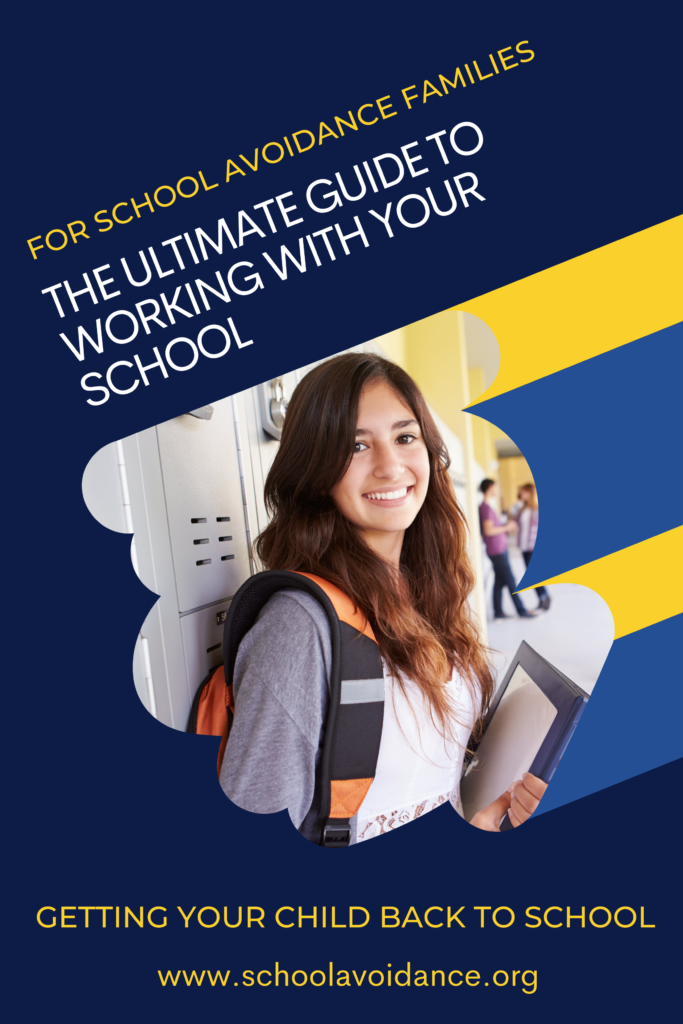